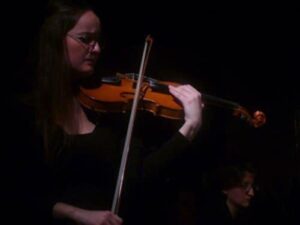 Tania Sikelianou was born in Patra (Greece). She began her studies with Prof. J. Georgiadis (violin) and with Prof. M. Travlos (composition). She has taken part in internationally renowned masterclasses, such as the ‘Summit music festival’ in New York, the ‘Recontres Internationales de Jeunesses Musicales’ in Geneva, and the 7th ‘International Masterclasses’ in Brugge with A. Brussilovsky. In addition, she took violin lessons from A. Brussilovsky in Paris (2002), and Joyce Tan and Reinette Thiadens at the Conservatorium of Amsterdam (2006-2008). In the period 2010-2011, she was following the advanced master program soloist Contemporary music (Violin) in the University College in Gent with George van Dam and Pieter Jannsen.

Tania also holds a Bachelor’s and Master’s degree in composition from the Conservatorium of Amsterdam (Prof. Wim Henderickx). She had composition lessons with Prof. Klass de Vries, Daan Manneke and Fabio Nieder, and attended seminars with Theo Loevendie, Tan Dun and Fabio Nieder. In addition, she has followed a course in film music with Prof. Jurre Haanstra (2005) and courses in electronic music with Prof. Jorrit Tamminga and live electronic music with Jos Zwaanenburg. In 2009-2010, she followed the Sonology course in Den Haag and participated in the Field-recording workshop with Justin Bennet.

As a violinist, she has performed in many recitals and festivals in Greece (Music May in Patra, Athens Fringe Festival, International Festival ISFFA2013, Instituto Cervantes, Athens(2013), Megaron Concert Hall of Athens(2016) e.t.c), Cyprus (Concert with Vanesa May in Cyprus, Pafos Summer Festival), USA (Kennedy Center, Washington), Germany (Schumann Haus, Berlin), Belgium (festival Champ D’Action at de Singel, Antwerp, Orpheus Instituut in Gent, Flagey in Brussels) and the Netherlands (International Gaudeamus Music Week, De Duif, Zaal 100). She has also participated in the music recording of the movie ‘Paradise now’ (2005) and won three prizes during the workshop, Champ D’ Action at de Singel (2011). During the last few years, she has been performing a lot of new contemporary pieces, most of them for solo violin, dedicated to her by International composers.
Also, she has presented for the first time in Greece compositions by M.Feldman, T.Takemitsu e.t.c.
In MAY 2016 she performed for first time in Greece the piece by LUigi NOno LA lontananza nostalgica utopica futura in ONASSIS CULTURAL CEnter..
Currently, she is making a lot of solo or chamber music performances in Greece and in Europe. 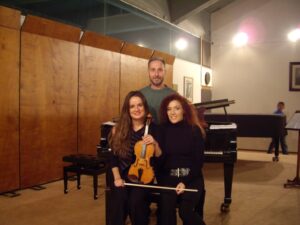 Her works have been performed by the Nieuw Ensemble, the Asko Ensemble at the Gaudeamus Music Week (project ‘Asko’s 7×7 for young composers) and the Goeyvaerts Strijktrio at the Composition project ‘Dokter Faustus Schönberg, Mann, Webern.’ In April 2006, Tania was a guest composer for the project ‘Seven deadly sins’ with a performance in the ‘Muziekgebouw aan ‘t IJ’ in Amsterdam (the Netherlands) alongside the ‘Nederlands Blazers Ensemble’ and the ‘Eerste Christelijk Lyceum’. Also, in May 2008, her first Opera, ‘Medea,’ was performed in collaboration with the Theater school of Amsterdam. Currently, new compositions are performed in Germany at the University of Colorado and in L.A.Kalifornia.

Tania was voted composer of the Week, Young Talent 2007, on Radio 4 (the Netherlands). She was a semi-finalist in the Queen Elizabeth Competition for Composition, with her piece: Morphoplasia, for piano and orchestra (2009)and(2012) and she got the first prize in the ‘Andreas Drekis, award’ (an international opera competition for composition) for her Opera Helike Athanatos (2010). She was a finalist in the International Competition in Composition ‘Forme Unique 2012’, in Adelaide, Australia. Currently, she was selected as a composer and violinist with a high score on the ICMC-SMC 2014, Athens.
Ιn August 2014 and 2017, she was teaching and performing with wonderful musicians, at the International Music Seminar, Kozani, in Thessaloniki.
Also from January 2016, she is in progress for a violin solo recording new pieces, dedicated to her in Athens and she will be part of a cd in Thessaloniki 2017. 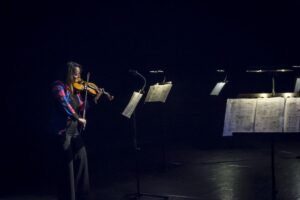 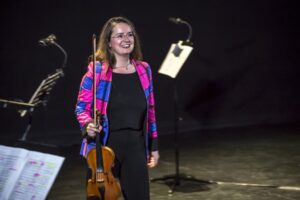 Some performances of Tania Sikelianou are the following:

Tania has performed in many recitals and festivals in Greece, Cyprus, the USA, Germany, Belgium, and the Netherlands. 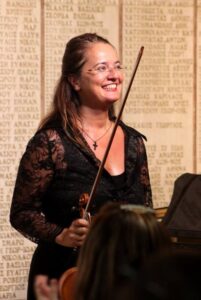 A part of her work: