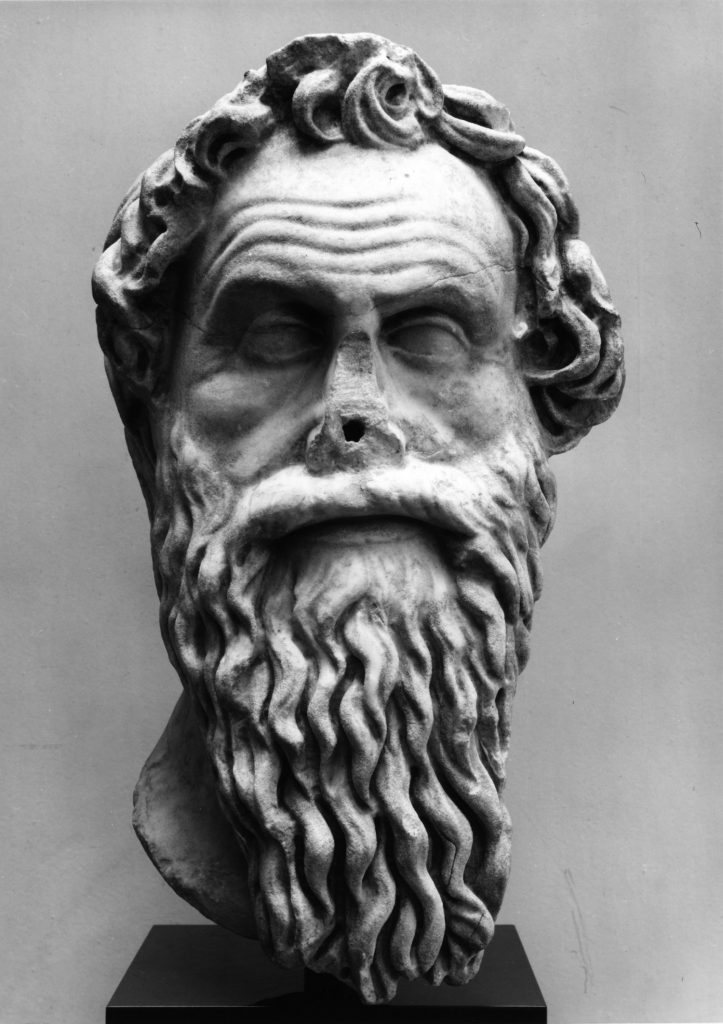 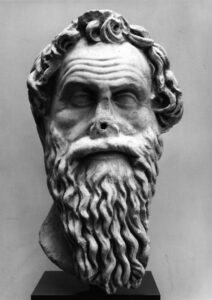 An expert on the trafficking of antiquities has called on Hindman Auctions in Chicago to cancel the sale of a Roman marble head until possible links to the disgraced British dealer Robin Symes can be disproven.

Forensic archaeologist Christos Tsirogiannis has made public three photographs of the sculpture that authorities seized from Symes’s house, which indicate that the bust may once have been in his possession. But while Robin Symes has been linked to looted goods, a proven association with Symes would not conclusively indicate whether or not the bust is illegal.

Tsirogiannis is head of the working group Illicit Antiquities Trafficking and, in this capacity, has special access to archival material from police raids in order to help track down looted treasures.

Symes has been lying low since 2016, when Italian carabinieri working with Swiss authorities searched a storage unit in the Geneva Freeport and uncovered 45 crates filled with antiquities, some of which had been stolen from archaeological sites. Symes had kept the trove in storage for some 15 years, likely to conceal it from the family of his longtime business partner Christos Michaelides after his death in 1999.

The head, a large 18-inch tall portrait of the Greek philosopher Antisthenes dating from around the 2nd century CE, is scheduled to hit the block this Thursday with an estimate of $100,000 to $150,000.

It was first recorded on the market in 1981, when it was sold at Sotheby’s New York for $4,840. The auction house has never revealed the name of the consignor despite requests from Tsirogiannis. According to the Hindman Auctions provenance, it then moved between collections in the U.S. before Christie’s New York sold it in 2012. As Tsirogiannis has pointed out, Christie’s provenance for its sale included slightly different information that suggests the work was at one time in Switzerland at Art Market, Zurich, in 1988.

The photographs held by Tsirogiannis were taken by the professional photographer Dieter Widmer, who is based in Basel. They are undated but on their reverse they bear the signature ‘R.S’. Tsirogiannis believes this is enough evidence that the work was at one time in the hands of Robin Symes (and Michaelides).

“We do not know when,” Tsirogiannis told Artnet News. “Whether, for example, it starts with them before the 1981 Sotheby’s auction, or if they were the ones who bought this object.”

Responding to this allegation, Hindman Auctions has stated: “The presence of photographs of this work of art within those founds in the Schinoussa home of Robin Symes and Christo Michaelides is not in itself proof that it was either owned or traded by Mr. Symes. Mr Tsirogiannis should know well that unlike other photographic troves, such as those from Giacomo Medici or Gianfranco Becchina, the ‘Schinoussa archive’ is not wholly indicative of illicit or unlawful ownership.”

Tsirogiannis has said he hopes for greater transparency in the art market. “This is an unprovenanced object, whether it can be called a looted object is a matter for further research. All the research that can be done through public archives or those held by me has been done.” Of Sotheby’s decision not to share the name of the consignor in 1981, he added, “it’s their turn now to reveal all the information they have”.

Tsirogiannis said that the omission of Art Market, Zurich from Hindman Auctions’s provenance record remains unexplained, noting “the information has been published by me since 2013, and is freely available to everyone.” He has also called for the withheld names of the previous private owners in California (1981) and Washington (1988-2012) to be made public. “Why do they not reveal their names if the object is clean and there is no fear about it? This is information that only the market can and should publish to prove that the object is absolutely legal.”

Hindman Auctions said: “As is standard procedure for each of our sales, we cleared this lot with both the Art Loss Register and Interpol prior to bringing it to auction, and are thus confident of its provenance absent additional information. Should credible information emerge, then we would, of course, re-evaluate the piece and work to restore it to its rightful owners.”