Albert Camus, the exponent of a critical turning point for all conscious humanity!

He passed away just 47 years old, let’s say… absurdly – in a car accident, on January 4, 1960 (he was born on November 7, 1913), in the most creative period of his life. But we always remember Albert Camus. Everyone can find details about their life and work online.

I mention him simply because his books have been one of my favorite readings. But, you will tell me that his works were loved by many – of course also by Greeks. In “Xenos”, the protagonist of the book, Mersos, denies the conventionality of everyday life and is indifferent to the emotional and moral values ​​of the society in which he lives. He is accused not so much of the crime he has committed as of being so different from his peers, a “stranger” among them.

After all, Camus himself, commenting in some way on his hero in “The Myth of Sisyphus”, notes that he was neither good nor bad, nor moral, nor immoral! And of course, all this atmosphere in “Xenos” is characteristic of a very peculiar species for which Camus reserved the name “absurd” !!!

Here, however, Sartre intervenes and notes that this word under Camus’s pen acquires two very different meanings: the absurd is at the same time a real situation, but also the clear realization by some people of this situation. It is “irrational” the man who, from a basic irrationality, draws the conclusions that are imposed. In other words, the same shift of meaning and concept occurs, as when we call “swing” the youth who dance swing. So what is “irrational” as a real situation, as an initial fact? Nothing less than man’s relationship with the world. 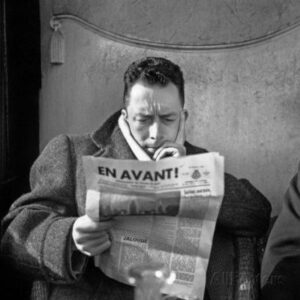 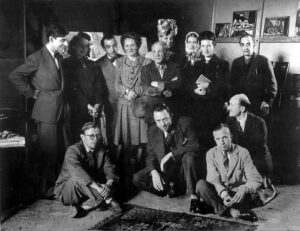 The Plague records the behavior of people in a world that seems aimless and without a future, while Sartre had said about the Fall that “in this book Camus had hidden”. In his essay “The Myth of Sisyphus”, Camus explores the meaning of the absurd. In general, with the subject of his essays, he is placed with special brilliance, in the great tradition of the French moralists, whom Alfred Adler calls “Nietzsche’s forerunners”.

They were works that at some point won him the Nobel Prize.

The reference here to Albert Camus does not fall within the scope of updates on French literature. It is just the 103rd anniversary of his birth and it is certain that Camus with his work exceeded the limits of the local and became the exponent of a critical turning point for all conscious humanity.

Although I noted his three short stories above, it is difficult to classify him as a choreographer. Also, although he wrote plays, it is still difficult to call him a playwright, as he was also not a strict philosopher. We would consider his works an essay “business”. In addition, I would say that it characterizes the era in which she lived and stood as its most representative author. He always moved on the margins of philosophical currents and debates and unwaveringly insisted on meditating on the human condition.

Refusing to profess faith in God, in history, or in logic, he opposed Christianity, Marxism, and Existentialism, which was preached by the relative companion of Jean-Paul Sartre.

Sartre, in fact, wrote a farewell article, an obituary, for his “ex-boyfriend”, for which he had some reason to be vindictive, since Camus had left him in the heart of the Cold War, preferring his own path. There, in tender words one might say, he notes characteristically:

“We were both spoiled: a fight is nothing – even if we are not going to see each other again – it is another way to live together and not forget the existence of the other in the small, narrow world that has us granted. So our quarrel, I do not think about him, I feel his gaze on the page of the book, on the newspaper he was reading and I say to myself: How can he see this? What does he say about that right now? ” [translated by Kostas Stamatiou].

Camus was killed before he turned 47 in a car accident when his driver and close relative Galimar deviated from his course and threw his Facel-Vega car into a tree. The newspapers of the time spoke of speeding (130 km / h), driver’s illness, or flat tire, but author Rene Etiable assured that after persistent studies he had in his hand’s evidence that the Facel-Vega was a mobile coffin – however, no newspaper agreed to publish them.

“For all those who loved him, there is an unbearable irrationality in this death. We will, however, need to learn to see this sliced ​​work as a whole.

Just as Camus’s humanity embraces a human attitude to death that was destined to take him by surprise, just as his proud pursuit of happiness entailed and claimed the inhuman necessity of death, we will recognize in this work and in life that is inseparable from it, the pure and victorious attempt of a man to conquer every moment of his existence, plucking it from the claws of his future death. ” [Jean-Paul Sartre, Epitaph to an ex-friend]