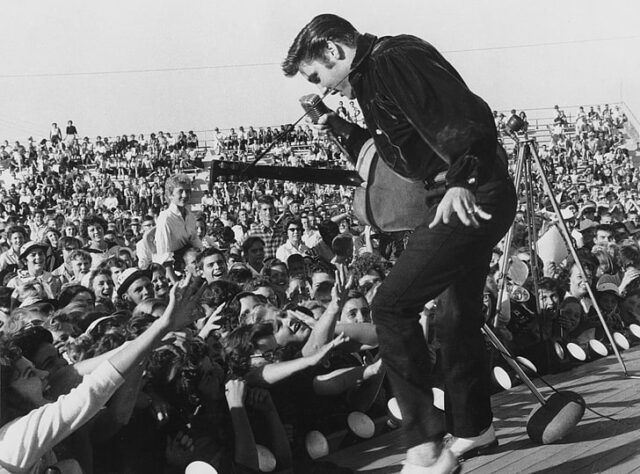 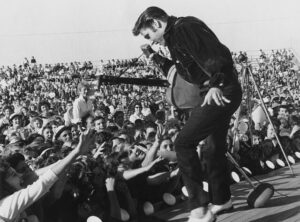 Elvis Presley, or “King of Rock n Roll,” was arguably the greatest musical figure of the 20th century, and his place on the world music scene remains indelible. His musical achievements broke every precedent, stigmatizing generations of people from the ’50s until his death, while his special dance moves, combined with his attractive appearance and characteristic.

The King of Rock n Roll, Elvis Presley, will be born in Tupelo, Mississippi, where he will remain until the age of 13. He will then move with his family to Memphis State.

In his early years, Elvis Presley will come into contact with the hostility of his classmates, which makes him a relatively lonely personality, and his “oasis” is now on a used acoustic guitar that he will begin to discover at an early age…

From his earliest years, Presley would come into contact with a variety of musical genres and genres, such as Gospel, Rockabilly, and Blues, and the area where he grew up could not help but offer him country music.

So with all these musical supplies in his “quiver” he will start to take his first steps in music, on behalf of the company Sun Studios, where he experiments a lot with all his musical sounds, creating a new sound, combining them, the Rock n Roll.

The peculiarity of his voice allowed him to deal with even more musical genres. Thus, he will be very successful, also playing folk and jazz, influenced by the local Christian Liturgies in the slums of Memphis, where he grew up. 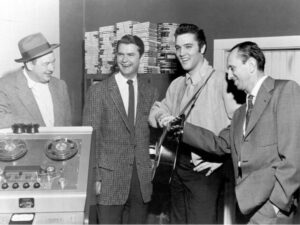 THE RISE OF FAME

We are in the early ’50s, and Elvis Presley makes a living as a truck driver, a repairman in garages, and in general any job that could arise.

In 1953 he will pay Sun Studios $ 3.25 to be able to record a 2-track album, intending to give it to his mother as a birthday present.

He will later return to the company, giving another $ 8.25, in order to be able to make another record. During the recording, the then owner Sam Phillips, who had experience from various music recordings, notices something interesting in the young Elvis and they renew their appointment in order to try it out.

That $ 11.5 and fortune will begin to unfold the talent of one of the greatest musicians of all time.

Under the direction of Sam Phillips, and after several attempts and failures, the first album of Elvis Presley will be released with the single “That’s all right” and his legend will begin to spread in America, while the release of his second album will make him known in every corner of the country. In addition, his TV appearances will begin a little later.

So the rights to the Elvis Presley fairway will be transferred to the record label RCA for $ 35,000, and the first million copies will not belong incoming, with the release of the “Heartbreak Hotel”.

In a very short time, the legend of Elvis Presley had conquered America. His special stage presence with his dancing movements, excited the American youth, while he will become especially loved by the female audience due to his attractive appearance.

Presley brought something brand new to American music, but also to the then middle class and the perceptions that made it up, with the result that every time he appeared in concerts or on television, he became the subject of discussion.

But Elvis Presley with his main “weapon” his music, and with one success following the next, will win American society, while his huge successes such as “Don’t Be Cruel”, “Hound Dog”, “Love Me Tender”, “All Shook Up” and “Jailhouse Rock” will make him the idol of American youth.

In 1957 Elvis Presley is the most famous artist in the world and his figure will stigmatize world music. So, to this day, every country and domestic music industry is looking for and highlighting artists who look like Elvis or have had something similar to him, musically and visually.

Now all of America was dancing, dressing, and singing like Elvis Presley.

But beyond the yellow press of the time, Elvis Presley will marry Priscilla Bollier in 1967, whom he had met during his military service when he recently shot the first film “Love me Tender”

In general, in the ’60s, his every move, socializing, and way of life will become objects of discussion, making him one of the most talked-about people of the time. 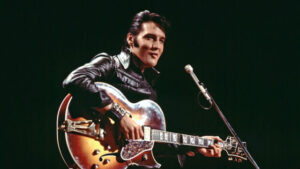 After a seven-year hiatus, and far from the international charts, the song “Suspicious Minds” will reach number one on the American Billboard on November 1.

From the early ’70s, Elvis Presley will return completely to his music career, leaving essentially his involvement with cinema.

It will start with “Kentucky Rain”, which in the US alone will sell over 500,000 copies. This will be followed by a series of successful albums and performances including “Elvis Country”, “That’s the way it is”, “Love Letters” and “Elvis Country”.

The musical achievements of Elvis Presley

Presley is one of only four artists to make two of his top five albums on the same Chart, and his filmography consists of 33 films, most notably “Love Me Tender” and “Jailhouse Rock.”

He has entered the Rock and Roll Hall of Fame, Gospel Music Hall of Fame, Country Music Hall of Fame with dozens of Soundtracks and Singles, and with 75 Albums from 1955 to 1977 with most being gold and platinum more than once. He is also one of the most commercial artists of all time with record sales of over one billion worldwide. 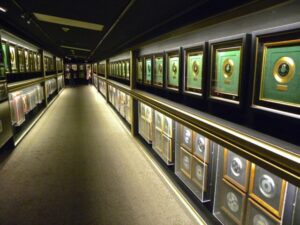 At the Grammy Awards, he will be honored with 14 nominations, while he will win 3. In addition, he will be awarded the Grammy Lifetime Award at the age of 36, for his contribution.

In August 1992, he will be posthumously honored with 110 gold, platinum, and multi-platinum albums and singles, with the largest album award presentation in music history.

The last years of Elvis Presley

Despite his huge musical success, and especially after his divorce, Elvis Presley had begun to close in on himself and shy away from the limelight.

At the same time, sources stated that he was under the dependence on prescription drugs, which affected his appearance, his stage presence, and his performance in recordings of music tracks.

The last time the public saw the legend of Elvis Presley up close was in 1977 in Indianapolis on June 26.

The same year, on August 16, Elvis will die prematurely at the age of just 42, due to a heart arrhythmia at his impressive estate, Graceland, with his funeral turning into a national event as thousands of people rush to watch.