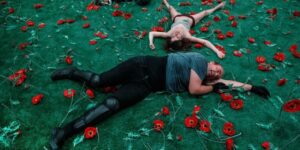 At the beginning of the second decade of the 21st century, ecology and the environment remain under-represented and under-theorized both on the Western stage and in theatre theory, in spite of the increasingly prevalent issue of global warming.

One of the reasons for this was pointed out as early as 1994 by theatre theorist Una Chaudhuri, who in her article “There Must Be a Lot of Fish in That Lake: Toward an Ecological Theater” drew attention to the anti-environmental history of theatre. By asserting the deterministic forces of the environment, as well as by defining human existence as a nexus of purely social practices, realism and naturalism made it possible to affirm the binary of nature versus culture. In line with the aims of industrialization, contemporary theatre, as the heir of the aesthetics and ideology of 19th-century humanism, offered a purely social depiction of human life. However, since ecological topics hardly exist within traditional dramatic structures, they often inhabit newer theatrical practices.

Fever is one of the few Slovenian productions to directly address the ecological crisis. By applying the principles of devised theatre, director Žiga Divjak develops a communicative performance that manages to bring the environment into the center of the discussion, thus cutting into the continuous affirmation of human superiority over nature.

Divjak has proved himself on several occasions to be a master of creating dramaturgical structures that meaningfully support the content of the performance. This is true of Matej Puc’s monologue in Seven Days, which introduces haste into the very rhythmic structure of the narrative, or in the way Gejm repeats personal accounts of refugees to suggest the systematization of violence.

Similarly, Fever shapes its factual material on the causes and coming consequences of global warming into an effective discursive form that resembles, but also transcends, media reporting.

Aware of the social desensitization that escalates in the face of media over-saturation, Divjak presents the content with the intensity that is generated by repetition and emotional escalation in a measured segment of theatrical time. In continuous contact with the tragic subject matter, the theatrical space establishes itself as an effective tool for informing the audience, because it uses deliberate theatrical means to produce effects that are inscribed in the bodies and minds of the spectators beyond the bare informativeness of the media.

In doing so, it skillfully avoids the production of pleasure and the corporate propaganda discourses that shift responsibility for the climate crisis onto consumers, by demanding diligent recycling for example. It presents the climate crisis as a political and systemic issue, driven mainly by the non-ecological management and wasteful lifestyles of the richest 1% of the population. With the realization of the asymmetry of pollution, the global human issue becomes a reflection of class inequality, which shifts the consequences of meeting the luxury needs of the richest onto the shoulders of the least privileged.

The unravelling of this situation is central to Fever, questioning the tipping point that will lead to social organization and activation. In this, Divjak draws on the book How to Blow Up a Pipeline, in which Swedish professor Andreas Malm, through his analysis of past revolutionary acts, concludes that pacifism is ineffective as an agent of social change. Instead of peaceful negotiations, Malm proposes a shift towards concrete action and deactivation of the tools of capitalism. The performance paints a pessimistic future from the extremes of its content, which constantly points to the impossibility of finding an effective solution to the ecological crisis, and raises the question of whether humanity is really at a point from which it can only passively watch its own demise.

At the beginning of the performance, the audience enters a round dome, covered with white plastic surfaces, which, with a lawn of red flowers in the middle, resembles a hotbed, their plasticity reminding us of human disconnection from nature (set design by Igor Vasiljev). The experience is further enhanced by a suffocating, monotonous ambient sound that evokes the burning of fuel (Blaž Gracar). The audience is seated in a circle, under an unshaded light, which allows us to gaze at each other at all times, while at the same time there are also six actors in civilian clothes mixed in among the audience, who themselves occupy a chair on each of the four sides of the stage. The audience and the actors become a collective of witnesses who can only passively observe the ecological changes that are taking place, even though they are constantly being discussed with horror. 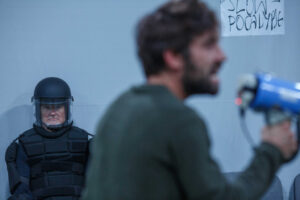 Vito Weis takes the central place in Fever in the role of an activist who, while seeking the audience’s eye contact, calls on them to more radical, even violent actions, but he is repeatedly silenced and paralyzed by the holders of power, represented by Gregor Zorc and Damir Avdić, who are dressed in bulletproof vests. Weis is the point through which the activist tone of the production is most clearly crystallized. His statements, focused on the question of whether we will be able to look our descendants in the eye and tell them that we have done all we could to save the planet, are built on the realization that systemic change can only come in the form of severe societal pressure. Declarative initiatives for social activation and emancipation seem like shots in the dark in a system that generates alienated, apathetic and atomized individuals.

This is the point at which Fever seems a bit naive, because by initiating collective action, it actually contributes even more to the awareness of the paralysis of the individual. The direction is aware of the complexity of this problem when, with Zorc’s shouts: “What can be done? Nothing can be done,” it juxtaposes the solutions outlined by the enthusiastic Weis with a re-examination of the possibilities of their concrete implementation.

Fever also develops more personal stories. Avdić recounts his youthful experience of the war in Sarajevo, which he did not believe in until he saw the bombing with his own eyes. Although his narrative is the one that stands out the most from the substantive dimension of the whole production, the experience of an unexpected war draws parallels with the present situation, in which the gravity of the situation is incomprehensible to the point where it begins to pose a direct experiential and perceptible danger to the individual. In this way, he addresses in particular the capacity to push aside abstract concepts, only realized far in the future, in the context of the psychological dimensions of the human mind.

The narration by Draga Potočnjak is more focused, adding a dimension of intergenerational conflict to the production. She speaks about climate change from the perspective of a generation that is being blamed for the destruction of the planet. Her position is one of the few places in the production that directly attributes the responsibility for the situation to the everyman, but at the same time the direction constantly doubts it, presenting it as an unintended consequence of the desire to create a more comfortable life for their offspring. In her speech, formulated as a confession to her daughter, she also addresses the position of the millennial surrounded by all the goods, whose declared criticality without concrete experience of deprivation becomes just empty chatter.

In the shadows of these elaborate stories are the Austrian actresses Mina Palada and Maya Sara Unger. By performing only more peripheral actions, such as writing down less familiar concepts that will become increasingly relevant terms to describe new geographical and psychological conditions as the climate becomes warmer, they create a sense of unequal distribution of the roles of the actors.

In some places, Fever uses directorial approaches familiar from Divjak’s past work, which lead to the same formal outcomes: The spatial organization and positioning of the audience, the pinning of information to the wall, the unshaded set, the way documentary material is used, the transition from factual material to personal stories. In the context of ecological topics, these approaches open up some new interpretative indications, but at the same time they suggest a fixation of the author’s poetics, which seems somewhat problematic, especially because this is a young director who mostly works in the form of devised theatre, dedicated to directorial experimentation and innovation. Despite this, Fever is an exemplary example of a missing theatrical practice that, in addition to raising awareness of humanity’s destructive impact on socio-ecological systems, also points in the direction of transcending it.

Even with the program note, which introduces the viewer to a selection of environmental NGOs and thus encourages their own engagement after the performance, Fever reads as an example of theatre activism based on documentary material. It is precisely the awareness of the necessity of change that creates the need for a rethinking of the function and scope of theatre; Could theatre best realize its activist potential as a catalyst for the redirection of like-minded people into other informal groups that would build new social bonds in the direction of activation and integration? And, in doing so, realize mechanisms that could reconnect a society into a community? 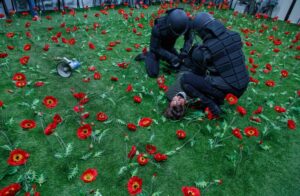