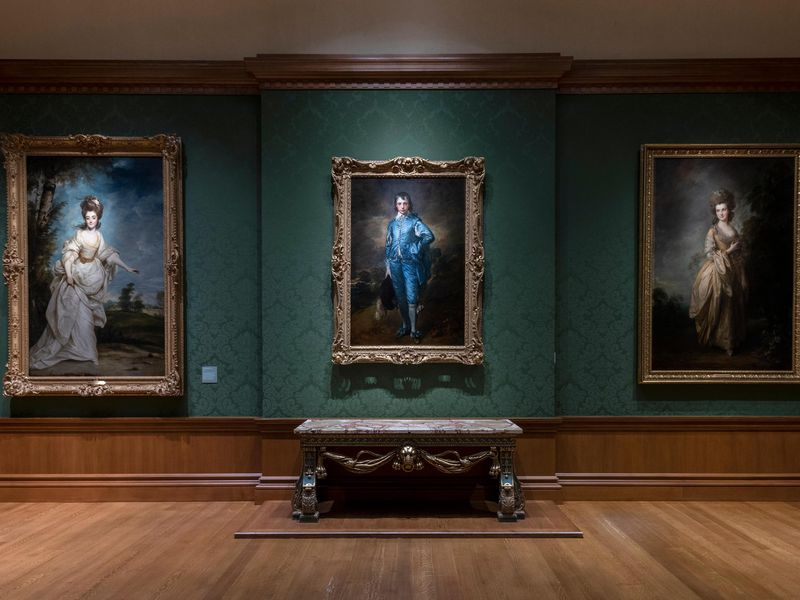 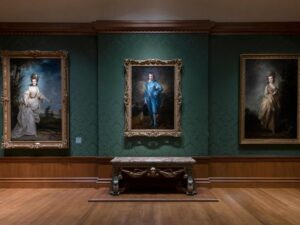 The following January, one of the most famous paintings in America will travel to London, returning to its place of origin exactly 100 years after its initial departure.

The subject of Thomas Gainsborough’s Portrait of a Young Gentleman (1770) a ruddy-cheeked boy sporting a bright blue satin costume has captivated audiences for centuries. Best known simply as The Blue Boy, the full-length portrait hung in British galleries until the early 1920s when the cash-strapped Duke of Westminster sold it to American railroad magnate Henry E. Huntington for $728,000 (about $11 million today).

As the New York Times reported in 1922, the work was packed into a custom-built case and transported thousands of miles by steamboat and railroad to San Marino, California. The portrait has resided at Huntington’s estate now the Huntington Library, Art Museum, and Botanical Gardens ever since.

The impending trip to Britain will mark the first time Huntington has loaned its most prized work. Per a statement, the portrait will debut in a free exhibition at London’s National Gallery on January 25, 2022, exactly a century after its last showing in the same building, and remain on view through May 3. As critic Christopher Knight writes for the Los Angeles Times, the visit is “guaranteed to be a media sensation.”

In a separate statement, the gallery’s director, Gabriele Finaldi, says, “The loan of Gainsborough’s The Blue Boy to the National Gallery is truly exceptional and a unique opportunity for visitors.”

Finaldi adds, “Rich in historical resonances, a painting of supreme poise and elegance, The Blue Boy is, without doubt, a masterpiece of British art.”

Curators at the Huntington spent almost three years cleaning the work, removing old varnish, and stabilizing its supports. But a handful of prominent experts fear that even with these restoration measures, the trip to London poses a threat to the fragile, 250-year-old painting.

In a December 2018 memo reviewed by the Los Angeles Times, a panel of nine American and European conservation experts “strongly recommend[ed] against lending” The Blue Boy. The group cited concerns that the artwork is too fragile to withstand the subtle vibrations, movement, temperature changes, and other disturbances that take place during a transatlantic flight. Conservators also expressed fears that travel might accelerate damage to the portrait’s paints, wood, and canvas.

“Why the panel’s advice was rejected is unclear,” Knight writes.

Huntington’s president, Karen R. Lawrence, did not respond to the Los Angeles Times’ requests for comment. But the museum’s director, Christina Nielsen, said that a second unnamed panel met in September 2019, after conservation work was completed, and approved a one-time loan to London.

In the Huntington statement, Lawrence acknowledged the unusual nature of the upcoming loan.

“This is an unprecedented loan, one which we considered very carefully,” the president says. “ We imagine this to be the one and only time the painting will travel, given its iconic status at The Huntington.”

Upon its debut at the Royal Academy in 1770, The Blue Boy quickly attracted widespread praise. Though the work was painted in the 18th century, Gainsborough’s young sitter possibly his nephew wears a 17th-century fashion: His knee-breeches, slashed doublet, and lace collar are an homage to costumes worn in the time of Anthony van Dyck, a 17th-century Flemish artist who inspired Gainsborough and other British painters, according to the Huntington.

Rendered in animated brushstrokes, Gainsborough’s subject poses in front of a dark background, with one hand on his hip and the other clutching a wide-brimmed hat. The boy holds the viewer’s eye with a serious gaze that some have likened to Leonardo da Vinci’s famous Mona Lisa, as fashion historian Kimberly Chrisman-Campbell noted for the Atlantic in 2017.

The painting became so popular in Britain that in 1922 when it was announced that the work was soon to be shipped overseas to America, some 90,000 people visited the National Gallery to bid The Blue Boy farewell. In subsequent decades, reports the Atlantic, the portrait has inspired artists Kehinde Wiley and Robert Rauschenberg, as well as Jamie Foxx’s blue suit in Quentin Tarantino’s Django Unchained.

“This masterpiece has made an indelible mark on both art history and popular culture, capturing the imaginations of a wide range of audiences,” says Lawrence in the statement. “… We hope that this partnership with the National Gallery will spark new conversations, appreciation, and research on both sides of the Atlantic.”