Superhuman. Otherworldly. Next-level. Even words like these don’t encompass Jeffrey Cirio’s performance in the title role of Akram Khan’s Creature, which made its U.S. premiere with English National Ballet in February. In one of the most pivotal roles of his career, Cirio portrays a creature who is undergoing a military experiment at a desolate Arctic research station. He is put through various mental and physical tests to monitor his adaptability to extreme cold, isolation and homesickness, critical qualities to mankind’s final colonization of the earth and beyond.

As this anguished Creature, Cirio pushed the boundaries of ballet, perhaps even of dance as an art form. His slightest movement the trembling of his fingers, a backbend, a crawl, a breath swept the audience into the journey with him. In the nearly two hours that Cirio was onstage, you experienced every feeling and emotion along with him, from frigid cold and despair to grief and love.

“He’s extremely gifted as a mover,” reflects Khan. “But it’s more his mindset—what he wants out of dance and where he wants to take himself. A lot of dancers just want to dance. They just want to remain on the surface of the body. There are a rare handful that are willing to go not just physically, but emotionally and psychologically, into characters, and that’s what Creature demanded.”

Cirio, who turns 31 this month, has reached the top rank of three world-renowned companies Boston Ballet, American Ballet Theatre and English National Ballet. But despite his credits, Cirio isn’t the type to settle. “I am such a stubborn person inside,” he explains. “When I am interested in something, I have to do it the best I possibly can. I just want to continue learning and being better for myself, not for anyone else. It’s a never-ending process.”

Khan calls Cirio a “rare beast” who can fluidly move between classical, neoclassical and contemporary repertoire. Whether he’s portraying a fiery Basilio or heart-torn Siegfried, or interpreting an abstract work by Balanchine, Forsythe or Kylián, Cirio brings pure artistry to his roles­ not just dazzling technique. “Jeff is a beautiful dancer of extraordinary versatility,” says ENB artistic director Tamara Rojo. “He has performed with the company in such a broad range of roles, from Creature to Abdur in my Raymonda. It’s a joy to see what he brings to both the studio and then the stage with each role he takes on.” 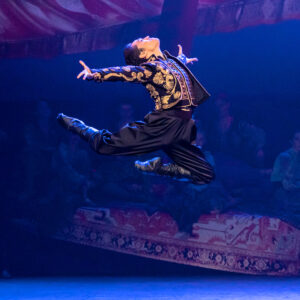 When the dance world came to a pause during the COVID pandemic, Cirio was finally able to step back from his fast-paced career and reflect on what mattered most to him. “Being away from my family in the U.S. throughout the whole isolation process really made me miss home, and I felt like I was being called back,” he says. This month, Cirio returns to where it all began, performing with Boston as a guest artist in MINDscape and Swan Lake, then rejoining full-time as a principal starting with the 2022–23 season.

A Pennsylvania native, Cirio began ballet at 9 years old after watching his older sister, Lia, take classes at Central Pennsylvania Youth Ballet. His innate talent was apparent from the get-go. “He started learning so quickly and catching up with technique within weeks,” recalls Lia, a Boston Ballet principal herself. “There was almost something magical or spiritual with the way he approached art.”

It was during those early years that Cirio also began taking classes in hip hop with Brian Scott Bagley, a fellow student at CPYB. Cirio credits the freestyling fundamentals he learned from hip hop as one of his biggest influences in mastering versatility, which served him well later as he took on contemporary work. It also helped him develop a love for improvisation, something he still enjoys as a way of exploring new ways of moving.

Cirio eventually began entering competitions, but in his typical form, he never chased after medals. One of Lia’s favorite early memories is of her brother at the USA International Ballet Competition in Jackson, Mississippi, in 2006. Jeff says he went into the competition thinking, “I probably won’t make it past the first round.”

“He told me that he wanted to participate just to see Daniil Simkin dance,” laughs Lia. “I later got a call from my mom, and she says, ‘Jeff got the bronze medal!’ ” Cirio and Simkin, who is now a principal with Staatsballett Berlin, eventually became close during their time together at ABT and have remained friends ever since. 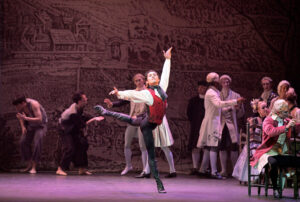 Cirio went on to become a trainee with Boston Ballet School, and at 15 was invited by artistic director Mikko Nissinen to join Boston Ballet II for the 2007–08 season. For someone who has maintained such a swift trajectory throughout his career, it’s hard to imagine that when Cirio joined the junior company, he felt unprepared for the demands of professional life. He calls it a “light-bulb situation.”

“Having my older sister already in the company, I was well aware of the professionalism required and how difficult it is,” Cirio recalls. “I knew I wasn’t there yet mentally. I didn’t want to be learning choreography or doing corps de ballet work when I knew I should still be progressing in my technique and maturity.”

That realization led Cirio to enroll in the Orlando Ballet School, where he sharpened his skills under the guidance of Peter Stark and Olivier Munoz. He also picked up more medals along the way, earning silver at the Seoul International Ballet Competition and becoming the first American to win gold at the Helsinki International Ballet Competition. A more grown-up and experienced Cirio returned to Boston in 2009. “It’s the ‘wow’ factor. His dancing is contagious,” says Nissinen, whom Cirio has often referred to as his “ballet father.”

During his first stint in Boston, Cirio also began to choreo­­graph, creating works like of Trial, for Boston’s BB@home series, and fremd, which premiered in the company’s 2014–15 season at the Boston Opera House. He counts Boston Ballet resident choreographer Jorma Elo as one of his early inspirations who opened his eyes to contemporary work. In the summer of 2015, he and Lia launched Cirio Collective, a troupe of artists who gather during the off-season to create new contemporary work and perform. Having other creative interests outside of dance, such as music, deejaying and fashion, provides further inspiration for his choreography.

“I love different genres of music, especially house, and the technique and trickiness of making everything seamless when deejaying ties a lot into how dance works,” says Cirio. “I’m interested in a lot of things, and the connections I make through these other hobbies can ultimately help me when working with Cirio Collective or at Boston Ballet in the future.” 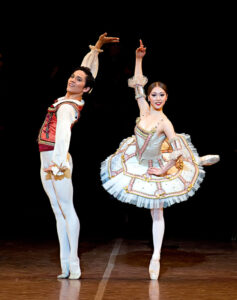 It’s easy to envy Cirio’s talent and success, but anyone who meets him soon realizes he is refreshingly down-to-earth. “He’s such a positive person, and other people in the room are able to feed off that,” says Blaine Hoven, a former ABT colleague and current Cirio Collective artist, of Cirio’s team-player personality. “He surrounds himself with people that are not toxic,” adds Lia. “I think he draws people to him that are around the same wavelength and that want to grow with him.”

As grounded and level-headed as he is, one thing that isn’t lost on Cirio is the impact he could have on aspiring dancers. Being Filipino American, he looks up to artists like Khan, who is of Bangladeshi descent, and hopes his own success will inspire other dancers from underrepresented communities.

“As an Asian male, seeing someone like Akram be at the top of his game and taking me under his wing makes me so grateful,” says Cirio. “Hopefully I can also be someone to look up to for the next generation. It doesn’t matter what your race or skin color is. You can be where I’m at too.”

As he returns stateside, Cirio already has his eyes set on new goals, including shadowing Nissinen on the aspects of directorship and learning the business side of a ballet organization. He also has a list of dream choreographers to work with, one of whom is Crystal Pite. “I have really loved the contemporary choreographers that are out right now. I would also love to continue working with Akram.” And now that he is settling into a new home base, he is excited to prepare for another major step marriage. He and ENB junior soloist Anjuli Hudson got engaged in February.

“Jeff’s made good choices,” says Nissinen. “He wanted to learn and experience things in New York and London. Now he’s made the choice to come back to Boston, and I am happy that the circle is completing.”