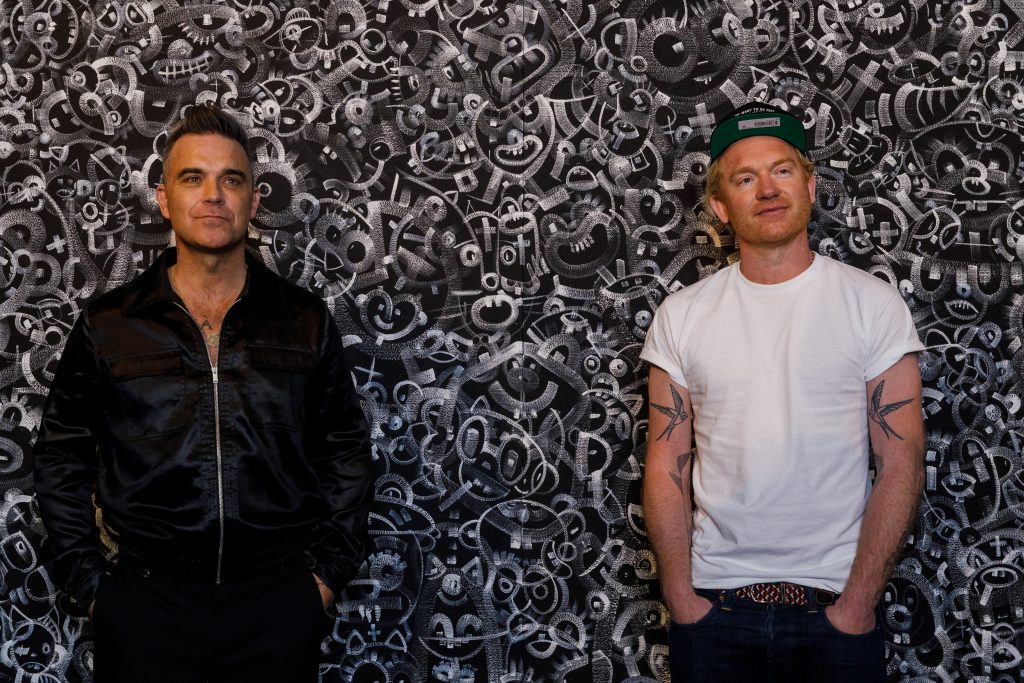 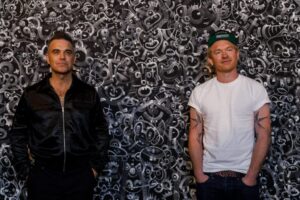 With millions in record sales, countless accolades and sold-out concerts under his belt, British pop superstar Robbie Williams might appear to be have it all. But there’s still at least one area where the “Angels” singer felt insecure, and that is being featured as a contemporary artist during London Gallery Weekend this year.

“I was terrified because, in the U.K., you are not allowed to go outside your box, and my box is definitely the pop world. So I worry about the kick in the head that I’m gonna get for straying outside of my lane,” Williams told Artnet News during the show’s invitation-only opening reception on Thursday evening. “But at the same time, I’m compelled and obsessed, so I’m going to do it.”

Together with his creative partner Ed Godrich, Williams unveiled 14 black-and-white paintings the pair worked on together at Sotheby’s New Bond Street space, just ahead of London Gallery Weekend, which kicks off in the U.K. capital today. The artistic collaborators also curated a gallery hopping route for the three-day event, featuring five galleries in central London. 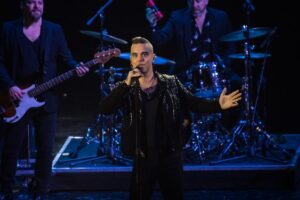 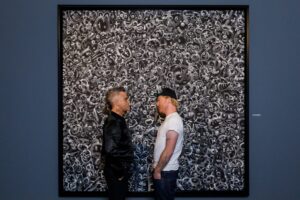 ed. We developed our technique and we learned to work together,” Godrich said. The pair worked on about 10 paintings at the same time, “so Rob can be down there, and I can be there sometimes next to each other,” he added. “The fact that this is made on polystyrene explains why we get that amazing, smoking texture.”

The pair, both born in 1974, took the development process seriously, but they wanted to keep their art “whimsical and silly,” Williams said. There’s also an element of nostalgia embedded in the black and white paintings, with subtle references to the music scene they grew up in.

“Me moving in from the pop world to do art… I put a lot into whimsy,” Williams said. “It’s what I’m about, what I wanna be, and I know the art world is a very serious world. But that’s not me, and that is not what we are. If you don’t look at it and think of the 80s cartoons, or how it would feel to walk straight into a cartoon, you kind of miss the point.”

But have the duo ever argued about artistic differences over the past five years? “Not argued…” Godrich said “I’m…” Williams intercepted: “Bossy.”

Despite the self-depreciation, Williams has been making a name in the art world recently, both as an art collector and an artist. The pop star offered a trio of Banksy artworks from his private collection earlier this year to raise funds for his other creative projects. One work was withdrawn, but the other two paintings fetched a total of $9.5 million at Sotheby’s in March. The auction house declined to reveal the price for the Williams Godrich collaborative paintings on show now, but a work by the pair was sold at its Contemporary Curated sale in April for £40,320 ($49,116, including fees), nearly double the presale estimates.

The black and white paintings are among many art projects in the pipeline, Williams noted. But in order to take things further, the duo will need guidance “on what happens next,” he added. “We have loads of ideas, but we both have ADHD. We need a grown-up to catch the best of us and implement it for us, or we will have a thousand ideas, and none of it will get done,” Williams said.

Making art is like “having superpower,” he said. “But I just don’t want them to be these paintings on the wall, and the next day, it’s going to be over, that’s it. I want to build a hotel. I want to do the interiors. I want to put a restaurant and art in the hotel.”

What about opening his own gallery? “Maybe,” Williams considered. “It’s a good idea.”

“Black and White Paintings” runs until May 25.