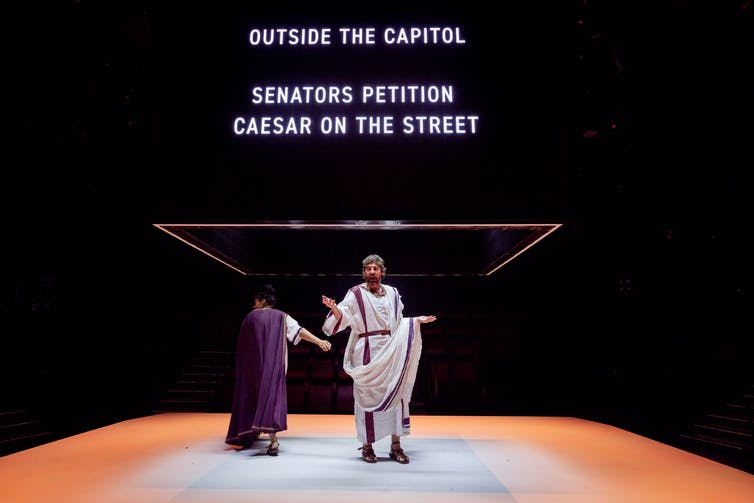 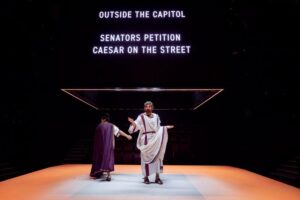 The Roman emperor Julius Caesar has been killed in the capitol, and the conspirators pause to reflect for a moment. Cassius, the main instigator of the assassination, wonders if this tale will be told again in the centuries to come.

“How many ages hence,” he asks, “Shall this lofty scene be acted over / In states unborn and accents yet unknown?”

And Brutus, Caesar’s one-time friend responds, “How many times shall Caesar bleed in sport?”

In other words, will theatres of the future put on shows about this world-changing event?

Kip Williams’ Julius Caesar (for the STC’s wonderfully refurbished Wharf 1 stage) takes this question from Shakespeare’s play and makes it the beating heart of the production.

It is not just that this 21st century Julius Caesar advertises the contemporary relevance of the story. We are also asked to consider just how political stories are told, re-told, and told again. 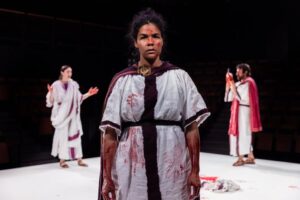 When Shakespeare wrote this play in 1599, the aging Queen Elizabeth I was still on the throne after 41 years. Her reign had descended from an early promise of greater freedom and rational government.

“I would not open windows into men’s souls”, she is believed to have said in an early speech to parliament, indicating a departure from her predecessors who had not held back from persecuting those who did not share their beliefs.

Modern historians have referred to Elizabeth’s early reign as a “monarchical republic”, a cautious blend of consultative government and royal prerogative. But, by the end of the century, the country had descended into a darkly tyrannous period of violence, factionalism and mutual suspicion.

For Shakespeare, the question of whether or not Caesar has become a tyrant is really a question about his own country’s increasingly dangerous politics. As Elizabeth’s death draws near, Shakespeare considers the tolerance of his countrymen for more autocratic forms of government. In 2021, those questions are being asked again. 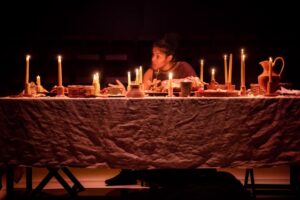 ‘The evil that men do lives after them’

The set-piece of Williams’ production – and the high-point of Shakespeare’s play – is a speech: Antony’s speech on the death of his friend, Caesar.

Brutus has tried to address the Roman people and explain the conspirators’ actions through reference to noble motives and truth-telling. Anthony knows that truth holds no sway over the public and that emotion will work every time.

For this production, Williams has brilliantly adapted the famous speech into a searing indictment of 20th and 21st-century political charlatanism. During the course of the speech, Geraldine Hakewill playing Antony transforms from a grieving friend into a modern political demagogue.

Putting on her standard-issue white power suits and her Christian Louboutin shoes – like a cross between Julie Bishop and Goebbels  Hakewill’s superb performance of reveals the awful terror that lies at the heart of post-truth, political manipulation.

That Shakespeare turns the fortunes of his play’s characters – and of Rome and the world – on the reception of just one speech is a brilliant piece of writing.

Williams is not shy of a similar focus on the power of words to close debate down as well as open it up. But, if Shakespeare’s London was already at some removal from Rome, then we are now several steps further along the road of political degradation in this production.

The consequences of failed politics

Shakespeare wants us to think that Brutus holds on to his nobility in the midst of the mayhem that he helps to unleash. But, to the viewer watching the play in 2021, the conspirators never seem to find a real justification for their actions, and the descent into chaos happens at speed.

Ewen Leslie’s Cassius is bitter and damaged, whilst Zahra Newman’s Brutus is less a remnant of past nobility than a naive fool who never had a secure grip on his own motivations.

The three actors play all of the roles in the play, with Williams’ smart use of video fleshing out the narrative. Video also plays an integral part in our consideration of the way that political motivations are distorted by the media.

Perhaps not as spectacularly innovative as in last year’s Dorian Gray, Williams’s use of video in this show is nonetheless completely in tune with the production’s focus on failed political discourse.

But that’s not to say that the physical space of Wharf 1’s new theatre in the round isn’t also put to good use. The three actors bring a manic energy to this dynamic new stage, motoring an already lean (in Shakespeare’s terms) script towards its frightening conclusion at a breakneck speed. Command of the dialogue from all three performers is superb: clear, direct, and artfully controlled.

With its clear-eyed look at the consequences of failed politics, this production of Julius Caesar is both an appropriate, and an extraordinarily well-executed inaugural show for the STC’s new stage.