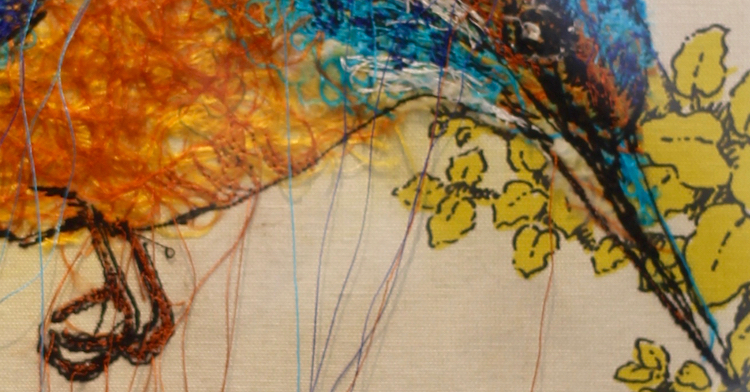 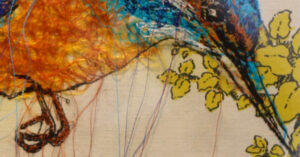 Using the sewing machine as a tool for continuous line drawing, Julie’s work explores movement and texture with often unpredictable outcomes, which have been likened to ink illustration. The speed and capricious nature of the sewing machine, when used in this unconventional way reflect characteristics of the subjects.

In the following article, Julie talks us through the creation of her astonishing piece, ‘Kingfisher’. We learn how this magnificent bird captured her heart and imagination and why on discovering banana fibres at the Knitting and Stitching show she was driven into action.

This scatter of color is apparently caused by the structure of the feathers. As my photographic skills are not up to capturing the swift movement of the Kingfisher which Julie used her own photographs along with a selection of images from the Internet to create a drawing of the bird in action.

Most of her fabrics are reclaimed, bought at charity shops, flea markets, boot sales, or donated. This particular fabric was found at a flea market in Brighton.

She has stitched the Kingfisher onto a few different backgrounds, this is one of her favorites, and she thinks the twist’s vertical branches work well with the loose hanging threads and the yellow accentuates the tiny purple detail on the bird.

She discovered banana fibres whilst visiting the Knitting and stitching show at Alexander Palace a few years ago. She was enticed by the vibrant colors and instantly she knew that wanted to experiment with them.

Although she’s never seen or heard of banana fibres before, apparently people have been making fibres out of banana stems since the early 13th century and the brilliant news is it is a totally biodegradable material.

The banana fibres she found were beautifully silky and brightly colored. A perfect surface to use for my Kingfisher. 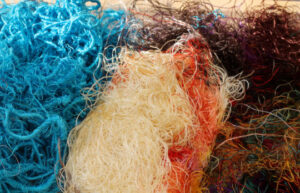 During the creation of the piece stage by stage

Julie began by loosely arranging the banana fibres into the shape of the Kingfisher and then trapped them with ‘bondaweb’, allowing some of the fibres to escape to encourage the illusion of movement. This layered surface produces a great embossed texture to stitch on to.

When Julie shops  for embroidery thread she takes an image of what she will stitch with her to help herself choosing her colors, it’s dangerous because she wants to buy about four or five shades of each color.

She wants to buy all the colors! She spends ages deciding on what reels she has to put back on the shelf. 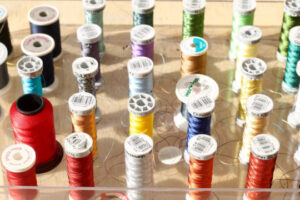 “I use the thread, as I would paint, usually starting with mid tones, and then working in the dark and finally highlights. I layer areas, stitching over stitches and the banana fibres not only to produce tonal qualities but also to guide the stich in different directions to emboss texture.

I always leave threads long and loose, arranged around the subject to give an illusion of movement and with the Kingfisher I decided to use a deep box frame, so instead of the threads being trapped in place behind the frame, space allows the threads to almost drip and fall from the bird, with them settling at the bottom of the frame.” 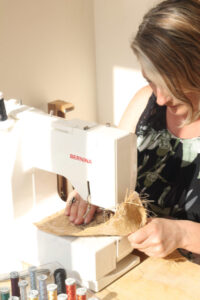 On what journey has the piece been on since its creation Julie says:

“The exhibition included work from contemporary textile artists from around the world, all approaching embroidery in very unique and varied ways  I was very honored to be approached to show my work alongside these artists and very impressed that the gallery owner had taken the risk of giving textile art an equal platform to fine art.

I am very passionate about blurring these boundaries and believe the art world is moving towards this. The exhibition was very popular and a great success for me, all my birds, including the Kingfisher have nested in new homes.”