The plastic of the Hellenistic period 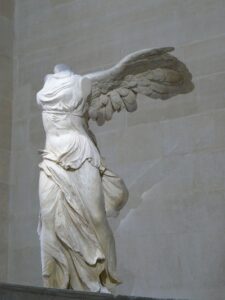 In the years mediated by the death of Alexander the Great in 323 BC. until 31 BC,
art is directly dependent on developments in social, political, and economic terms.

In addition to the constant warfare of the Successors and the increase in piracy, there is an advancement of science and the development of technology in the new centers, allowing the accumulation of wealth in the hands of rulers, who could now finance private and public projects, helping to maintain and the spread of their fame and glory. This had as a natural consequence the proletarianization of the population, creating miserable conditions for the poor and unemployed, as opposed to the luxurious living of the rulers.

There is a great change in the sculpture of this era, not only in the style of the works but also in the subjects chosen by the sculptors and their patrons. Sculpture initially presents an aversion to opening up space, something that soon changes. The artists are interested in the rendering of the third dimension, the depth, the movement of the forms, and the theatricality of their expressions, which allows today the use of the terms “baroque” and “rococo” for the art of Hellenistic sculpture. The choice of the subjects of Hellenistic sculpture is characterized by the turn to issues of everyday life, with a strong sometimes the idyllic and sometimes the dramatic element.

Man is no longer represented as the typical -responsible- representative of the city-state and therefore as the bearer of the qualities that derive from the life organized in it, but as a person with his personal, individualized elements. The representation of the faces is no longer of a timeless character but momentary. It was therefore natural to develop the art of the pictorial statue, the portrait, with the individual characteristics of the depicted. Thus, grotesque, deformed, dwarf, old, fishermen, colored types now appear. The sculptures of this period are not only religious in nature, but also secular.

They are not only assigned to sanctuaries or are not only erected on tombs but also decorate public and private spaces. The complexes, intended for the decoration of fountains, with themes of grabbing Nymphs by Satyrs, present a great bloom. The change in the spirit of plastic is also evident in the statues of the gods.

Their character, when not purely sensual, as in the statues of Aphrodite, is theatrical, pompous, empty, and cold. In Hellenistic sculpture, figures in a sleeping position, as well as allegories, make their appearance for the first time.

The plastic centers of the Hellenistic era have shifted from mainly Greece to the major cities of the East and the islands, which are also the major economic and political centers of the time (Pergamon, Alexandria, Rhodes, Delos). Attica and the centers of Peloponnesian sculpture have a conservative character, because the strong classical tradition did not leave much room for new creations and because the centers of mainland Greece lack the new hegemonic spirit and cosmopolitan character that formed the basis of their plastic of years.